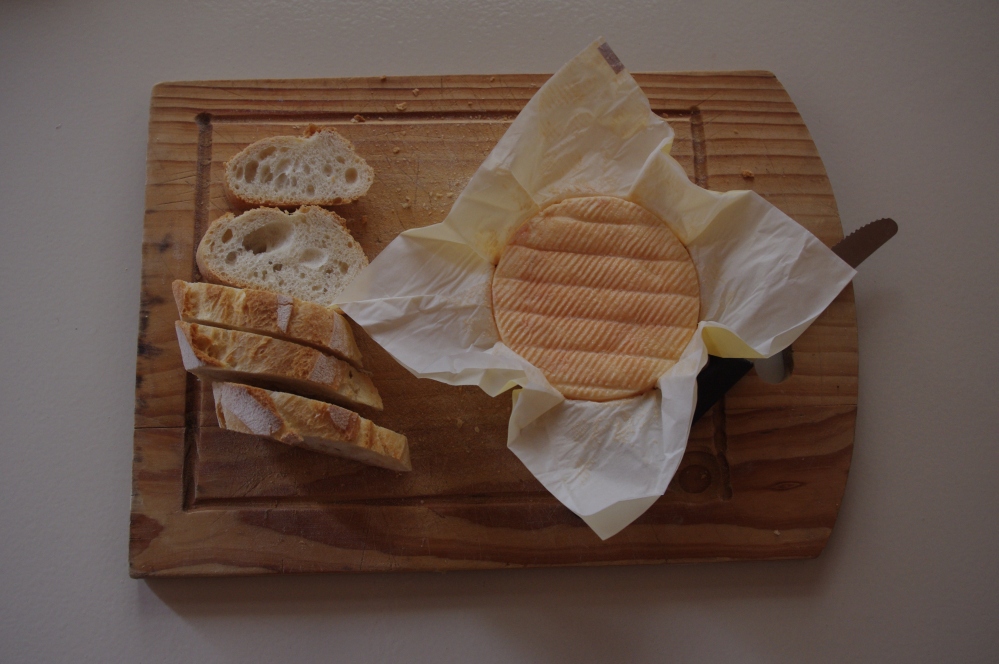 A thing I have learned about myself in France is that given the chance, I can eat way more cheese than is possible to keep a blog about. A few cheeses have fallen by the wayside, potentially to be picked up again at a later date when they take my fancy again at the fromagerie.

At the same time – because variety is the spice of life – I’ve had a bit of a cheese glut for the last couple of weeks. Mid-sized hunks of Cantal, Camembert, chèvre, feta and mozzarella have been hanging out in my fridge for a time, willing me to pay them the attention they deserve.

Happily, I managed to clear the glut and began this week with a blank slate (or a blank cheeseboard, if you will). Which means that Monday’s excursion to the shop was tinged with a little more excitement than usual – it was time for a new cheese.

The cheese counter spread enticingly before me, its various-sized wheels and wedges sorted pleasingly into textures and shapes – the washed rinds, the blues, the semi-hard cheeses – with small sprays of green parsley adding a touch of colour to proceedings. After carefully examining all of the options, I decided upon a small, orange round called Petit Munster Géromé.

The cheese’s name was the first thing that struck me – the distinctly un-French “munster” rubbing uncomfortably up against petit and géromé, words so French they may as well be wearing berets. After looking at the cheese’s origin, I suddenly understood – Petit Munster Géromé is made in the northeastern French region of Alsace-Lorraine.

I know a reasonable amount about Alsace firstly because of history, and secondly because of wine. The region is on France’s border with Germany and has switched hands between the two countries a ridiculous number of times. The cuisine there is all sausages and onions, and the wines also have a distinctly German vibe – one of the key grape varieties is Riesling.

Munster Géromé, however, is all French. It is made in an area that surrounds the Vosges mountain range that separates Alsace and Lorraine. In fact, it is this position that gives the cheese its name: until the late 1970s, the cheese was called Munster in Alsace and Géromé in Lorraine. The two were given collective AOC status in 1978, and the names were combined.

Munster Géromé is made from the milk of a specific breed of cow, Vosgiennes, which apparently produces milk with a higher protein content. The distinctly French notion of terroir comes into play here – the best cheese is supposedly made in the summer, when the cows are grazed on the pastures higher in the hills.

The ageing process can last as much as 10 weeks, and the rind is periodically washed with brine, leaving a pinky-orange outer that is kind of sticky and moist to the touch. But Munster Géromé’s most obvious character is its aroma – this is one hella smelly cheese. I didn’t think it was possible for something to smell like a public toilet after a rough Saturday night in a good way, but I was wrong.

This Petit Munster Géromé was, to put it as bluntly as possible, yum. It had a texture that fell somewhere between camembert and Port Salut, but I think if it had been a little older it would have been runny as all heck. It had a round, herbaceous flavour with more than a little tang – this was a pungent, mouth-filling cheese. Its buttery tones gave way to a more mushroomy flavour, and there was even a touch of honey in there.

This Munster Géromé was the kind of cheese I’d come to France to eat. While solid cheeses are great, there is no better cheese texture than one you can smear on bread (with the exception of cheddar, a favourite that is sadly not French and is consequently missing from shelves in Lyon – the French are nothing if not extremely parochial). The Munster Géromé was spreadable in the best, most delicious, most pungent cheese-that’ll-stand-up-and-object-at-a-wedding kind of way.

As with wine, I do find getting the same cheese twice somewhat of a missed opportunity, but with Munster Géromé, I might just be willing to take that chance.